In The Application of IOT, China and India Are Leading The World?

The Internet of things is be talking about all over the world, in this emerging field, China and India seem to be more positive.

In fact, Companies in China and India are even ahead of their peers, according to Forrester's data, these two places already have 75% of the company has developed or planned deployment of internet of thing applications, and another 20% are very interested in it. By contrast, only 52% companies in Latin American have developed or planned Internet of things applications, 32% would like to do so. In the European market, the two numbers are 42% and 33%, respectively. The data is from a survey of 3627 business and IT decision makers in multiple regions.

IOT solutions help companises to connect the physical world and the digital world, through the sensor to obtain information and environmental data, and impact on the physical world through the brake and so on. The retailer Kroger uses sensors and networking technology to understand the store inventory and operationstate. Lufthansa German Airlines uses meteorological data sensors to help planning time management and optimization of flight. 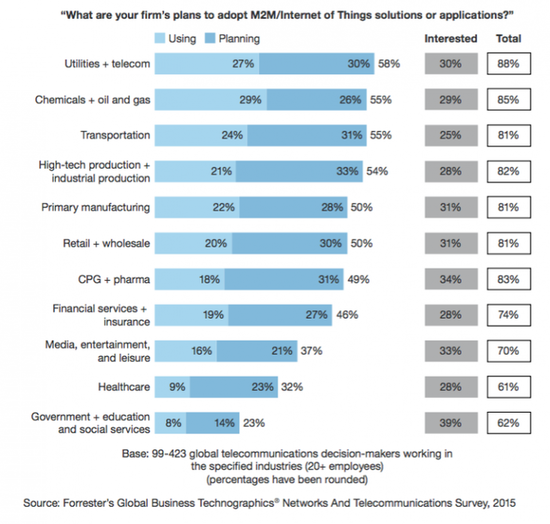 Survey shows that 19% of the world's companies have been using the Internet of things products and services, 31% would like to do so.

The survey also shows that the highest percentages of these industrys which have already deployed and planned to deploy IOT technology is public utilities and telecommunications companies, chemical and Oil and Natural Gas Corp, as well as transportation companies. And the attention to the technology of IOT is generally in the security and monitoring, supply chain management, inventory and warehouse management, customer order monitoring, etc.（Sharing from：tech.163.com）